Sponsored by Lutronic Utilizing two of their powerhouse platforms – the Genius® System (progeny of the Infini system) and the Ultra laser system (descendant of LaseMD) – Lutronic (Billerica, Mass.) has developed a new and powerful weapon in the war against facial aging: The TotalSkin Solution, which is safe for all skin types.

Utilizing two of their powerhouse platforms – the Genius® System (progeny of the InfiniTM system) and the UltraTM laser system (descendant of LaseMDTM) – Lutronic (Billerica, Mass.) has developed a new and powerful weapon in the war against facial aging: The TotalSkin SolutionTM, which is safe for all skin types. Genius’s microneedle radiofrequency (RF), combined with the 1927 nm thulium laser in Ultra, naturally stimulate neocollagenesis and neoelastinogenesis at depth, and recondition surface skin.

Results begin to manifest visibly in relatively short order, and the full anti-aging course of TotalSkin Solution is only about two treatments initially, according to dermatologist James Y. Wang, MD (Los Angeles, Calif.). “After a few sessions, annual or bi-annual maintenance sessions will maintain the result. The downtime is minimal (just an average of two days of pinkness with the RF microneedling), which is excellent when you consider what is normally associated with common facial laser therapies.

“These devices were basically designed for skin of color,” Dr. Wang added. “We use Genius RF microneedling to treat medium-to-deep depth for pigmentation, texture and tone. The insulated needles protect the surface of the skin and minimize risk of post-inflammatory hyperpigmentation (PIH). Genius RF also has safety features to prevent firing of the device until needles are fully inserted. 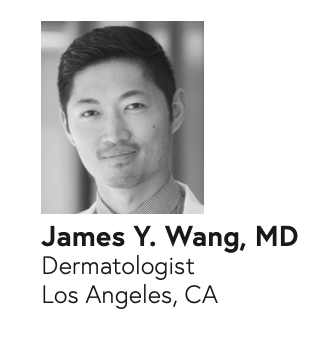 “For skin resurfacing, we use Lutronic Ultra’s 1927 nm wavelength, which is a safer wavelength to prevent PIH, even though it treats the skin surface,” Dr. Wang continued. “Energy delivery is controlled and emitted in randomly distributed points via scanning technology, so you don’t see hotspots or a grid-like pattern. It also uses a roller handpiece, which decreases human error. In combination, we are able to treat the entirety of the skin depth back-to- back without concern for overheating the skin.”

After topical numbing, the face is cleaned well and the first component – Genius RF microneedling – is applied with one to three passes, perhaps going over key problem areas again, according to Dr. Wang. “Immediately after that, we bring in Ultra and do two to four passes on the skin’s surface.” A topical serum is then applied. “This cools the skin and provides additional effects depending on which serum is chosen.”

Afterwards, Dr. Wang recommends refraining from intense exercise and unnecessary sun exposure for 24 to 48 hours, after which time patients may resume normal activity and their skincare routine. “The skin remains pink for two days and a little flaky for three or four,” he shared. “People may also experience a rough skin texture for up to two weeks, but it is not visible, and as it comes off, it reveals smooth skin underneath. That is when you really see the result begin to manifest and it will continue to improve over three to four months.”

The combination is the key, Dr. Wang explained. “One thing combination therapies do is give you better results in fewer sessions, so instead of repeated sessions with one modality, we use two technologies, and in this case we only need two or three sessions and the downtime is minimal. Moreover, the total healing time with TotalSkin is less than would be expected for either treatment by itself. Lutronic designs these devices with combinations in mind.”