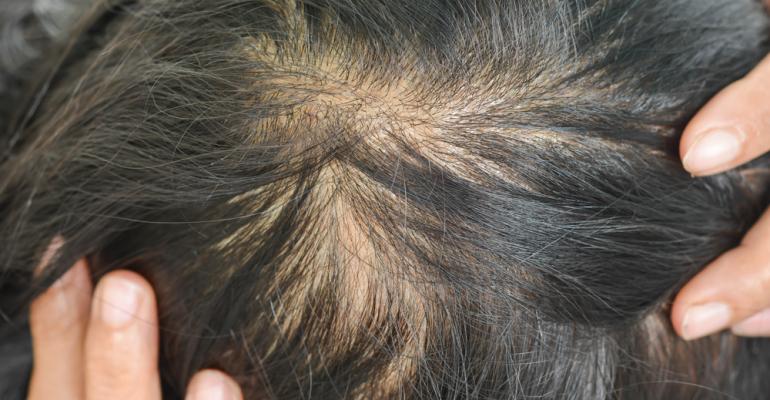 Thoroughly evaluating patients with hair loss requires considering everything from family history to the patient's dietary and drug regimens, said experts at The Cosmetic Bootcamp. Do not underestimate the impact of microinflammation, they added.

Along with aging, said Wendy E. Roberts, M.D., factors that attack hair include stress, dihydrotestosterone (DHT) and other hormones, free radicals and oxidative stress, styling, pollution, inflammation and compromised circulation and nutrition. "So when we lay out our hair-growth strategies, we want to target all these items, not only with our nutraceuticals, but also with procedures." (See related article, Nonsurgical treatments for hair loss). She is a Rancho Mirage, Calif.-based dermatologist at Generational and Cosmetic Dermatology.

Microinflammation of the Hair Follicle

The microenvironment of the hair follicle includes a complex system of pathways that physicians must target to treat hair loss, according to a Sadick et al. publication in the November 2017 Journal of Drugs in Dermatology. Key ingredients out of balance include androgens, cortisol and corticotropin-releasing hormone.

Jeanine B. Downie, M.D., said, "I tell patients all the time, if you're totally stressed and you don't exercise, that cortisol is bathing your whole body." Sequela can include diabetes, heart disease and hair loss. "The bottom line is, you have to take down the stress by exercising and doing other things — that's absolutely critical." She is director of image Dermatology PC in Montclair, NJ, and assistant attending physician at Mountainside and Overlook Hospitals in Summit and Montclair, NJ, respectively.

Overproduction of proinflammatory cytokines such as interleukin (IL)-1 and TNFa induces premature catagen, liberate reactive oxygen species (ROS) and spur apoptosis and further inflammation, according to Sadick et al. Additional harm comes from particulate pollutants, hair-product buildup, ultraviolet radiation and smoke from cigarettes, marijuana and vaping, said Dr. Downie. "So make sure you're asking all those questions." Patients who use marijuana may not admit it unless asked specifically, she explained, even when she can smell it on them.

All the above factors stimulate the inflammatory response, which can cause release of reactive oxygen species (ROS). The result is microinflammation within the hair follicle — even in forms of hair loss previously thought to be noninflammatory in origin, such as androgenetic alopecia, according to Sadick et al.

Microscopically, hallmarks of follicular microinflammation include perifollicular lymphocytic infiltrate, immunoglobulin deposits, fibroblast activation and mast cell degranulation. Clinically, said Dr. Downie, signs can include the early phases of follicular degeneration syndrome (FDS), during which women complain that their scalp is itchy or boggy. "It's more common in women with skin of color than in Caucasian women, but it affects both. I see it in Latina women. I don't see it that much in Asian-American women. But you see it in all the other races. You cannot ignore that microinflammation, because it's just going to get worse, and it can wind up taking their hair out."

Approximately 75% of African-American women over the age of 50 have significant hair loss, said Dr. Downie, and the problem increases with age. "For me, I wasn't noticing hair loss necessarily yet. I was noticing hair envy — I wanted more."

Dermatologists have long been familiar with hair loss triggers such as stress and postpartum  changes. But Dr. Roberts said they should also be aware of more recently recognized subtypes such as central centrifugal cicatricial alopecia (CCCA). "It's an epidemic in African-American women. And we're all at the front lines." Subclinical symptoms include scalp itching, tingling and pain. "Do not just give these patients a sulfur shampoo and say, 'I'll see you,' because lurking under there is this insidious inflammatory pathology that will result in complete scarring. It will wipe out the follicles."

The generational approach to hair-loss prevention involves looking at pictures of a patient's older female relatives to predict what the patient might look like in her 50s and beyond, said Dr. Roberts. Key analytical tools for patients at any age include the dermatologist's trained eye, a dermatoscope and hair pulls, the latter of which allow one to diagnose telogen effluvium instantly.

Patients also must understand that hair loss generally starts in the 20s, added Dr. Downie. "You have to go back and look at the patient who presents at 51, when they were 41, 31 and 21." Contrary to some patients' belief, she said, hair loss rarely begins with one ill-fated salon visit.

Medication reviews become especially important for older patients. "Many of our older patients are on medications. So yes, they might be having female pattern alopecia," said Dr. Roberts. But the alopecia also could stem from medication use. Potentially problematic drugs that dermatologists might not be aware of include H2 blockers (which can cause hair loss) and antihypertensives (which can lead to zinc deficiency).

Dr. Roberts generally recommends lab tests for thyroid function, ferritin levels and often-overlooked vitamin D. For patients with telogen effluvium, a study published in the October 2016 Journal of Drugs in Dermatology showed that common deficiencies include vitamin D, ferritin and zinc. "I cannot tell you how many times my ladies with hair loss living in sunny Southern California are vitamin D-deficient. It's a small factor that can exacerbate hair loss."

Among dietary issues, she said, don't overlook alcoholism. "That's another quiet little thing that we don't talk about. Alcoholism can lead to nutritional deficiencies." Dr. Roberts also recommended asking vegetarians and vegans how much protein they're eating, and from what sources. Adults need two to three daily protein servings to meet current requirements.

Physicians increasingly recognize the role of nutrition in a variety of health conditions. "In other words," she said, "you 'hair' what you eat." Sulfur-rich foods promote keratin synthesis.  "Keratin is made of sulfur-rich amino acids. Therefore, high-protein foods like meat (beef, pork and chicken), beans, legumes, eggs, milk, yogurt and nut butters are good sources of dietary sulfur," she said.

Vegetables like onions, kale and cruciferous vegetables are also very sulfur-rich, as is quinoa. Biotin (from liver, eggs, nuts and other foods) helps metabolize the amino acids that create keratin. It also strengthens hair and nails.

Good sources of vitamin A include orange and yellow vegetables, and cooked greens. "Remember," said Dr. Roberts, "vitamin A is fat-soluble, so it can only be absorbed when eaten with a fat source." Along with a healthy diet, appropriate water intake also fuels hair growth.

She added, "Patient education is the cornerstone of all hair loss treatments. This is not intuitive information. You really have to sit down, either with a handout or something on your website — somebody has to talk to your patients about all these little dominoes that lead to success in hair growth."

Treating the ‘Root’ Cause of Baldness With a Dissolvable Microneedle Patch
Aug 19, 2021