Sponsored by BTL Aesthetics The percentage of women who have cellulite easily rests in the 90s, making it one of the most common aesthetic indications seen worldwide. Conversely, it is among the least successfully managed when it comes to achieving persistent visible results, and any aesthetic physician can tell you that while many therapies exist, few truly deliver the goods when it comes to reducing the appearance of cellulite.

The percentage of women who have cellulite easily rests in the 90s, making it one of the most common aesthetic indications seen worldwide. Conversely, it is among the least successfully managed when it comes to achieving persistent visible results, and any aesthetic physician can tell you that while many therapies exist, few truly deliver the goods when it comes to reducing the appearance of cellulite. Enter the Taut and Toned® protocol using the Emsculpt Classic or Emsculpt NEO and Emtone devices from BTL Aesthetics (Boston, Mass.), a non-invasive, no-downtime approach whose results wow patients and practitioners alike.

This one-two punch provides reduction of fat, muscular hyperplasia and hypertrophy to add lift and support from below and improvement of the skin from above, with additional improvement of local microcirculation, in four to six weekly treatments. “This is a multivector approach to a multifactorial condition, which is why Taut and Toned works as well as it does for cellulite,” said Amanda Holden, MD, medical director of Holden Timeless Beauty (San Diego, Calif.). “This is huge for women because cellulite primarily affects the vast majority of that population, and while we’ve had many treatments for cellulite, few of them are proven to give results that come close to what we see with Taut and Toned.”

According to Dr. Holden, cellulite is a genetically- and hormonally driven combination of tight fibrous septal bands tethering superficial tissue to underlying tissue plus skin laxity to cause the mottled, dimpled appearance of skin. Concurrent deposition of localized unwanted fat further affects this appearance, exacerbated by weak microcirculation causing edematous plumping in the area. “There are many therapies but other than this there is literally nothing out there that provides significant outcomes nonsurgically without downtime.”

“People often mistakenly believe cellulite is about fat, and nothing could be further from the truth,” said cosmetic dermatologist Mariano Busso, MD (Miami, Fla.). “Part of the difficulty we’ve had as a community attempting to treat cellulite has been based on this misunderstanding because patients, and even some doctors, think fat first,” he explained. “We definitely want to reduce fat because bulging fat accentuates the visible appearance of cellulite – but it is not the problem, just a symptom. You can be thin and have cellulite.”

“Also,” he added, “most of the early treatments for cellulite were largely mechanical, such as use of manual or device-based massage to improve microcirculation and lymphatic drainage, as well as temporarily improve elasticity of the fibrous septae. While we recognize the utility of this and incorporate it into modern methods, by itself it isn’t a viable solution for the best long-term results. And the mechanical 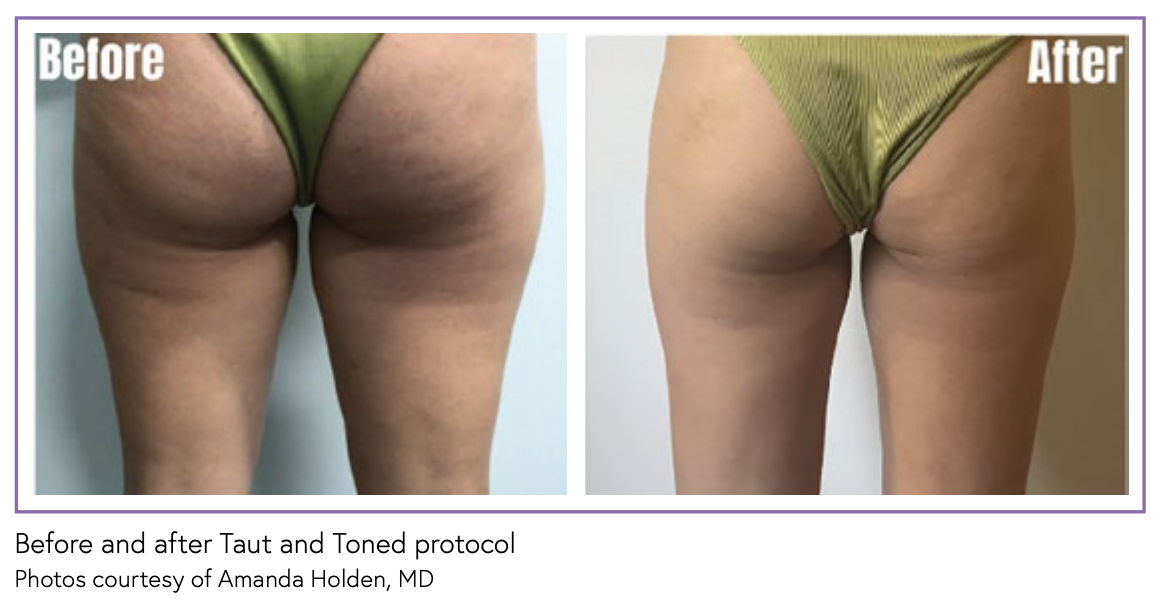 component must be powerful to contribute to greater long-term efficacy.”

Hence, the success of Taut and Toned. “We build the muscle underneath, use RF to reduce fat and improve skin, and provide a vigorous mechanical component to therapy. This improves microcirculation and lymphatic drainage to maximize results as well as manage the additional component of the appearance of cellulite. The muscular component of therapy does not treat cellulite itself but provides support in a way not seen with other treatments,” Dr. Busso expressed.

Taut and Toned harnesses the capabilities of two devices but actually combines more modalities, according to cosmetic dermatologist Paul J. Frank, MD, medical director of PfrankMD in New York, N.Y. The HIFEM technology in the Emsculpt device line targets area musculature specifically and non-invasively by inducing patterns of supramaximal contractions at frequencies unobtainable by exercise alone, resulting in scientifically proven muscle hypertrophy and hyperplasia over a course of treatment. “The addition of Synchronized RF with the Emsculpt NEO has an additional effect on muscle growth and fat reduction,” he said.

Sessions for individual Taut and Toned treatments using either Emsculpt or Emtone fit neatly within the convenient 30-minute window. Each Emsculpt treatment, according to Dr. Frank, takes about 30 minutes to perform. The treatment time for Emtone hovers around 20 minutes. “We can break it up however the patient wants but we usually do the Emsculpt first.

“One could say it is a combination of combination therapies,” he continued. “While Emsculpt or Emsculpt NEO work on the deeper structures, including the muscle and fat, Emtone treats more superficially to loosen the fibrous septae, tone skin and improve microcirculation.” Emtone itself combines radiofrequency (RF) with the mechanical manipulation of targeted pressure energy (TPE). The RF component raises tissue temperature to the scientific sweet spot to stimulate neocollagenesis. TPE breaks up the fibrous septae and enhances local microcirculation and drainage. “The reason massage was always a go-to, even if weak, is that therapy for cellulite was

this loosening of the fibrous banding and improvement in drainage, which are two main components of the condition.”

Dr. Holden agreed. “The combination treatment actually changes the structure of the fibrous septae in addition to lifting the underlying tissue closer to the surface as the muscles improve, which releases the tension that causes the dimpling,” she said. “Better microcirculation and tightening give us a lasting, smooth appearance. As a result, this multivector approach provides the best possible nonsurgical outcomes one can hope for with cellulite. Bundled properly for the patient, it is both efficacious and cost-effective. It doesn’t get better than that.”

“The fact of the matter is that there is no cure for cellulite, and nobody wants to get body lift or tummy tuck surgery when they can get a result safely and non-invasively with so much less risk,” Dr. Frank said. “We can use these devices on a lot of areas of the body – the upper arm and behind the knee, as well as the inner and outer thigh, buttocks, flanks and abdomen. It also appeals to a much younger population. We are seeing younger and younger patients because it is inexpensive when compared to surgery; much safer, and has such a minimal impact on your schedule that even busy young professionals can work it in.

“Remember that cellulite doesn’t show up when you’re 45, it often starts in the teens and 20s, and bothers women as soon as it arrives. There will always be a market for Taut and Toned,” Dr. Frank concluded.