Sponsored by: BTL Aesthetics The role of sex in overall health has been well-established; even more so, the impact of age-related issues on sexual capacity in women. Core-to-Floor therapy using high-intensity focused electromagnetic (HIFEM) energy with Emsculpt or Emsculpt Neo and Emsella from BTL Aesthetics (Boston, Mass.) may provide a significant boost in sexual health, owing to the FDA-recognized enhancement of blood flow as a side effect of HIFEM, and preliminary data suggesting improvement in sexual satisfaction, plus other added benefits.

The role of sex in overall health has been well-established; even more so, the impact of age-related issues on sexual capacity in women. Core-to-Floor therapy using high-intensity focused electromagnetic (HIFEM) energy with Emsculpt or Emsculpt Neo and Emsella from BTL Aesthetics (Boston, Mass.) may provide a significant boost in sexual health, owing to the FDA-recognized enhancement of blood flow as a side effect of HIFEM, and preliminary data suggesting improvement in sexual satisfaction1, plus other added benefits. By improving and strengthening core musculature with scientifically demonstrated health advantages, including improved continence – the barriers to the enjoyment of sex for women with urinary incontinence may be falling rapidly.

According to Carolyn DeLucia, MD, director of ViVa Rejuvenation Center (Hillsborough, N.J.), physical health plays a key role in sexual health and vice versa.“Countless surveys and studies have shown that the vast majority of women experience these problems and that they reduce sexual function and desire. This isn’t news because the knowledge has been around since the dawn of time,” she said.

Beyond the obvious, we also know sex has health benefits such as improved mood, reduced stress, and improved immunity,” Dr. DeLucia continued.“But at a certain point in life, women experience hormonal changes that impact enervation and blood supply to the genitalia. Reduced blood supply leads to vaginal dryness and pain during intercourse. Issues with enervation and subsequent loss of sensation make it more difficult or even impossible for a woman to achieve orgasm. Each of those will negatively impact libido. On top of that, many women develop incontinence after childbirth or from hormonal changes as well. Sexual desire in women is also understandably reduced when they are self-conscious about issues like incontinence.

“Because it is personal and embarrassing, women don’t readily discuss these issues, and they have been considered ‘just part of life’ for the longest time,” Dr. DeLucia expressed.“But that is simply not true anymore. There is a growing armamentarium of viable therapies that address these issues, and Core-to-Floor therapy with BTL’s Ems-sculpt and Emsella is a big part of that. Induced exercise to improve core musculature and reduced impact of these issues on muscle function has a positive impact on desire to participate in sexual intimacy. If you consider that about 45% of women experiencing urinary incontinence are unwilling to be sexually intimate, that alone is huge.”

“HIFEM has been shown to enlarge and improve all pelvic floor musculature and increase blood flow,” Dr. DeLucia continued.“Emsculpt Neo has been shown to close diastasis rectus an average of 19% at three months as well as decrease fat by 30% with a corresponding 25% increase in muscle. Improvement in abdominal muscle tone and pelvic floor function seems to correlate directly with improved sexual function in the literature.”3

Improvements in incontinence, sex, and quality of life have been demonstrated in two key studies of HIFEM technology. Samuels and colleagues2 studied women with urinary incontinence (n=75, age 55.45 ± 12.80 years, childbirths 1.85 ± 1.28 deliveries) who underwent six twice-per-week HIFEM sessions, with assessment of improvement in incontinence via standardized questionnaire and recording of the use of incontinence pads. 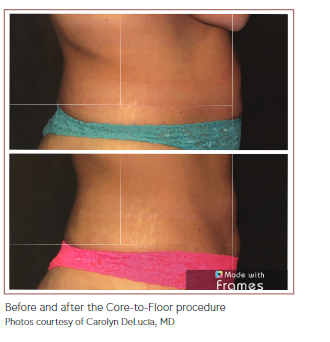 Secondary subjective measurement of changes in quality of life was also conducted. More than 80% of subjects reported marked reduction of symptoms after the sixth session, with almost 50% improvement as per the questionnaire, which increased further at six-month follow-up. Dramatic reductions in use of absorbent pads were also noted. Patients reported increased libido and better overall control of urination as well.

The results included statistically significant improvement of both continence and sexual function, with the greatest improvement seen at three-month follow-up, which was maintained at six months. Overall, subjects reported significant reduction in urinary leakage, reduced pain during intercourse, im-proved arousal and lubrication, greater satisfaction with orgasms, and increased sexual desire.

“What this all shows is a strong correlation between what HIFEM improves and a physical outcome that positively impacts sexual intimacy in key ways,” Dr. DeLucia explained.“Women who are embarrassed because of incontinence are much less likely to be intimate, so the scientifically proven improvement in incontinence with Core-to-Floor therapy brings this barrier down."

Add to that reported improvement in sexual sensitivity with Emsella, and we see more obstacles to sexual fulfillment removed. This indirect improvement mimics what physicians have been reporting anecdotally in our practices across the country. So many women abstain from any activity during which they may experience a bout of incontinence – especially sex – and that is a massive patient base.”

From a business perspective, Core-to-Floor therapy with HIFEM is proving to be a big winner for reasons like these.“The percentage of women who might benefit from HIFEM is very high,” said Dr. DeLucia.“But the personal nature of these conditions makes them difficult to discuss, so we have to get the word out because they will not or cannot seek treatment when they think this s just part of life and/or they aren’t aware of viable therapies like Core-to-Floor which are accessible to most people.”

Regular communication through email and social media improves the awareness, as do real patient testimonies, but you have to get them in the door. For Dr. DeLucia, her core OB/GYN specialty opens doors for discussion. But for practitioners of other specialties where that may be more challenging, she had this marketing advice: “I have rather frank signage in my office that won’t be as appropriate for a dermatologist, for example, but little teaser signs in the restrooms and other private areas hinting at the possibilities may be just the thing. We need to let patients know what we can do, and they will want us to do it.”