According to William Ting, MD, a dermatologist and medical director of California Dermatology Care in San Ramon, Calif., the Agnes RF monopolar radiofrequency microneedling device from Agnes Medical, Co. Ltd. (South Korea) is one of the most heavily used technologies in his practice. “I am a very happy Agnes RF user,” Dr. Ting emphasized. “Featuring a variety of needles, it can be used for different clinical indications. We use it to treat a variety of skin conditions that in the past we were not able to do much for, such as syringoma, sebaceous hyperplasia and lower eyelid bags.”

Ken Oleszek, MD, of La Fontaine Aesthetics in Denver, Colo., uses the Agnes RF for localized facial contouring, including decreasing the nasolabial fold, jowl, or the submental areas, as well as for defining the jawline.

“With the Agnes, you have one to three needles, so you can really hone in on the areas you want to treat,” Dr. Oleszek noted.

Agnes RF has a long-standing track record in terms of its clinical use in South Korea and is well studied, according to Dr. Ting. Some of the most recent published papers have focused on using Agnes RF for common cosmetic eye concerns.

Authors of a study published in 2018 in the Journal of the German Society of Dermatology1 found Agnes RF is a safe and effective alternative to surgery for the treatment of eyelid fat bulging. They studied 22 patients with lower eyelid bulging who were treated twice, four weeks apart.

“The average extent of fat bulging decreased significantly after 12 weeks and was maintained until 24 weeks,” the authors wrote. “There were no side effects, except for lower eyelid swelling and bruising that lasted for about a week.”

Dr. Ting explained that the Agnes RF proprietary microneedling needle is fully insulated except for the tip. “The tip goes into the skin, through the muscle into the orbital fat pad and shrinks the fat pad. It also leads to tightening of the skin,” he noted.

In another study published in 2019 in the Journal of Dermatological Treatment2, investigators looked at using the technology to treat periorbital wrinkles. The retrospective study of 21 men and women found treatment with the long microneedle (1.5 mm) was superior to that with the short microneedle (0.8 mm) in reducing periorbital wrinkles. There were no adverse events, according to the study. 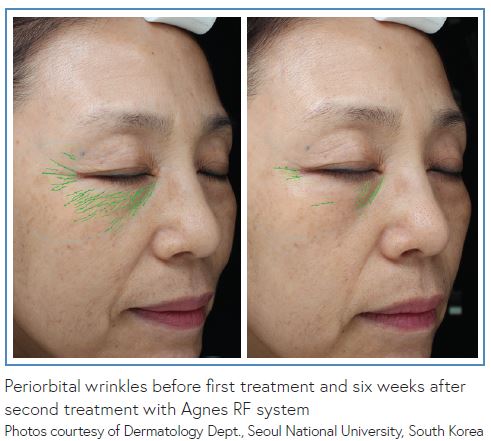 Dr. Oleszek advises patients that they will generally need up to three treatments for optimal effects.